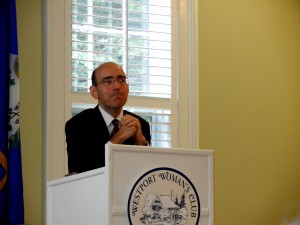 The Westport Woman’s Club was entertained at their June Club Day Luncheon by Adam Freedman, lawyer, legal commentator and author.  Mr. Freedman’s first book, "The Party of the First Part: The Curi­ous World of Legalese", is a witty and humorous look at language in the law.  He spoke today about the challenges of understanding the original meaning of the Constitution, which is the topic of his second book scheduled for publication in October: “The Naked Constitution: What the Founders Said and Why it Still Matters.”

Mr. Freedman views the Constitution as a blueprint for our system of government that sets the outer boundaries of political debate and helps define us as a country.  His humorous look at some of the legal challenges about the meaning of the Constitution throughout the country’s history kept the audience entertained, including real-life cases about such things as the unconstitutionality of summer homework (yes, it is constitutional) and the impact that semi-colons and commas can have on the interpretation of the law.   The importance of interpretation continues today as current issues like healthcare reform, medical use of marijuana and same sex marriage are brought to the legal stage.

Mr. Freed­man holds degrees form Yale, Oxford and the University of Chicago, and is a frequent guest on numerous radio shows. His essays have been featured in many publications including The Wall Street Journal, The New York Times, the National Review, Slate and Newsweek International.