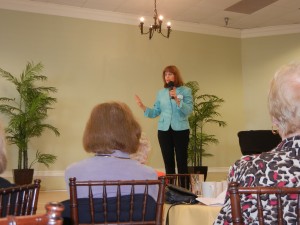 Lisa Wexler, the Gracies-Award winning creator of The Lisa Wexler Show, the most popular talk radio show in Westchester County, spoke to the Westport Woman’s Club at the October 1 Club Day Luncheon.

Ms. Wexler is a talk radio host, attorney, advocate, author and public speaker. She is a master at communicating information in an entertaining way and she spoke on a variety of issues related to the upcoming elections.  One of her passions is to bring greater visibility to a news topic she believes is underreported. While at the Republican Convention, two women, both military wives, approached her and opened her eyes to one such topic: the reality that a group of 3000 enlisted men and women were being downsized from the Navy.  Ms. Wexler has done her own investigations and in her view these people are not being let go for performance reasons, but to meet quotas causing them to loose not only their jobs, but housing and health care as well.  “This is a terrible injustice,” said Ms. Wexler, “and it is no way to reward people for their service and sacrifice.” Ms. Wexler offered that if anyone wants to learn more about this they can join the Facebook page sailorsagainsterb.