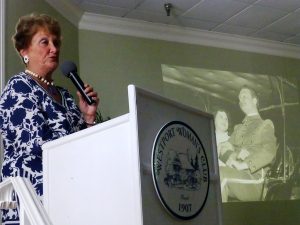 Susan Granger entertained a full house at the Westport Woman’s Club September Club Luncheon with stories about her being born and raised in Hollywood.

Her father headed production at Columbia Pictures; her stepfather was a producer at M.G.M. As a child Susan appeared in “Salute to the Marines,” “Abbott and Costello in Hollywood,” “The Fuller Brush Man” and others.  She spoke about one of her closest friends Jane Powell who she worked with in “Son of Lassie”.

Ms Granger captivated her audience when she spoke about the mythology and magic of Hollywood: what it was, what it is and what lies ahead. She described how the effect of some of our TV and movie programs, in our American Culture, is changing the thinking of the world. She pointed out that today the taste of the Far East determines the type of movies made, for example, there is a demand for 3D, IMAX, action films, science fiction and animation.

Although acting was part of her youth, her love for writing was a dream she pursued. She studied journalism under the tutelage of Pierre Salinger at the University of Pennsylvania where she got her degree.

As an adult, she worked on radio, TV and newspaper: check out the Granger Movie Gauge on her website, hhttp//www.susangranger.com.