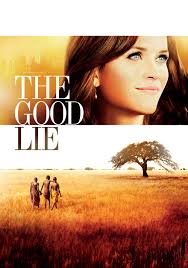 The film, starring Reese Witherspoon was released theatrically in 2014 and tells the true story of four Sudanese children orphaned after their village is massacred in the second Sudanese Civil War. Consequently, they make an arduous and dangerous trek through the plains, enduring hardship, death and sacrifice all the way until they reach safety in a refugee camp in Ethiopia. Years later, these youths are among 3600 selected for resettlement in America, only to have the one girl among them sent to Boston, while the three boys must to make a new life in Kansas City. Together, these young men must adjust to an alien culture even as the emotional baggage of their past haunts them. However, these newcomers, and their new friends like employment counselor Carrie Davis (Reese Witherspoon), strive to understand each other in this new home, as they make peace with their histories in a challenge that will change all their lives.

This story has been a part of filmmaker Margaret Nagle's life's work and her Westport appearance precedes a presentation at the United Nations the following day. Nagle's screenplay for The Good Lie was nominated for the 2014 NAACP Image Award as Best Original Screenplay. Directed by Academy Award nominated director Philippe Falardeau, the film has garnered the rare distinction of an A+ CinemaScore rating, the only film of 2014 to do so.

Currently, Nagle is executive producing the one-hour Fox drama series "Red Band Society," through Steven Spielberg's Amblin Television. Among her other credits are Boardwalk Empire and the Emmy winning HBO film Warm Springs, starring Kenneth Branagh and Cynthia Nixon as Franklin and Eleanor Roosevelt. Nagle has received the Writers Guild of America Award for Outstanding Long Form Original TV Movie, as well as Humanitas and Pen Award nominations. Nagle worked as a writer and supervising producer on the first season of "Boardwalk Empire" for HBO, earning a WGA Award for Outstanding New Series and an Emmy nomination for Outstanding Drama Series. The show won the Golden Globe for Best Series.