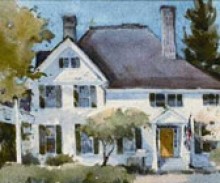 The Westport Woman’s Club is thrilled to have two greats of the stage, film, theater and television as the guest speakers at their Club Day Luncheon at 12 noon on Monday, March 4. Keir Dullea and Mia Dillon will talk about their life in the theater. Keir Dullea is best known for his starring role as the astronaut David Bowan in 2001: A Space Odyssey. He has appeared in dozens of movies, plays on and off Broadway and television including Madame X, The Good Shepherd and Cat on a Hot Tin Roof. Mia Dillon is a Tony nominated actress for Broadway's Crimes of the Heart and is also a Drama Desk Award nominee for Once a Catholic. She has appeared on several episodes of Law and Order as well as numerous other television shows. They founded the Theater Arts Workshop in Norwalk.  Keir and Mia have been married since 1999 and live part time in Weston.

Guests are welcome.  The luncheon will be held at the Westport Woman’s Club, 44 Imperial Avenue, Westport. There is a $17 fee, payable at the door, which includes luncheon and the guest talk. Reservations are limited and need to be made by the Tuesday February 26. Please contact the Westport Woman’s Club at 203-227-4240 for more information and to make a reservation.

The Westport Woman’s Club, organized in 1907, is a non-profit philanthropic organization dedicated to volunteerism and the raising of funds in support of the educational, charitable, cultural and public health services in Westport and surrounding towns.